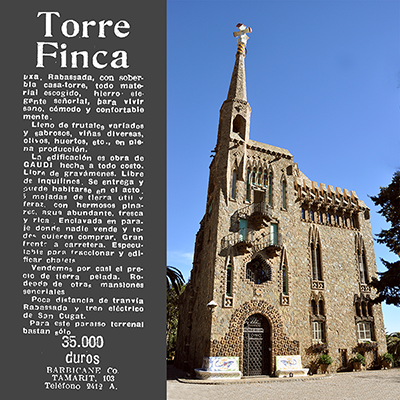 A newspaper ad dated August 18, 1925 offered a house designed by Gaudí for sale. Published in the Barcelona journal “La Vanguardia” under the title of “Torre Finca” it offered, with a wording typical of the time, an estate “full of varied and tasty fruit trees, various vineyards, olive trees, orchards, etc. in full production”. The building was described as “superb ‘Casa-Torre’ ( Detached house)“, “made at all costs”, “elegant, stately, to live healthy and comfortable”, “nestled in a place where nobody sells and everyone wants to buy”.

What is this house designed by Gaudí that, according to the data provided by the advertisement, was “a short distance from the Rabassada tramway and the Sant Cugat electric train”? This places it in the district of Sant Gervasi, since the aforementioned tram, which disappeared many years ago, began its journey on Avenida de la República Argentina until it reached Carretera de la Arrabassada (1), and the train to Sant Cugat did just like today on the Via Augusta.

The reference to a ‘Casa-Torre’ built with “chosen material, stately elegant iron” and “surrounded by other stately mansions” fits the characteristics of the Torre Bellesguard, a building designed and directed by Gaudí between 1900 and 1908 and which is It is equidistant about 800 meters from the aforementioned tram and train.

The estate had a “Great road frontage”, the current Carrer de Bellesguard in which the architect and his assistants built a stone and brick viaduct to widen it.

The advertisement contains more information that allows the property for sale to be identified with the Torre Bellesguard: “useful and fertile land with beautiful pine forests, abundant fresh and rich water”. The Bellesguard garden designed by Pedro Ballart Ventura has pines and cedars as well as horse chestnuts, willows, palm trees, laurels, oleanders and various fruit trees. (2) The existence of abundant springs is known since the origins of the estate, in the 12th century.

The house was offered free of encumbrances and tenants, “it can be inhabited immediatly”. It is interesting to point out that the same newspaper published a month later, on September 15, a brief note in the section “De Sociedad” (“On society”) with the following text: “After spending a long time in Luchon, has settled in his stately house ‘Bell -Esguart’—jewel of Gaudí’s personal art—the widowed lady of Figueras and children”. It refers to the wife of Juan Figueras, son of who in 1900 had bought the estate and commissioned the work to Gaudí, María Sagués. 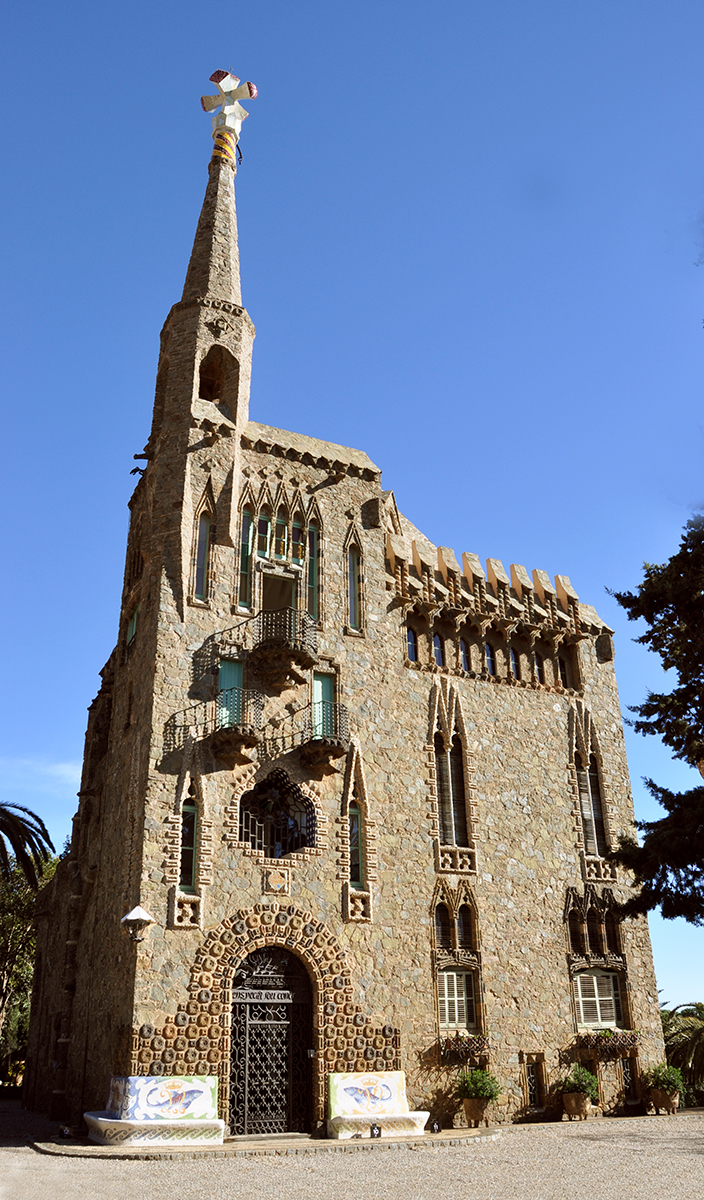 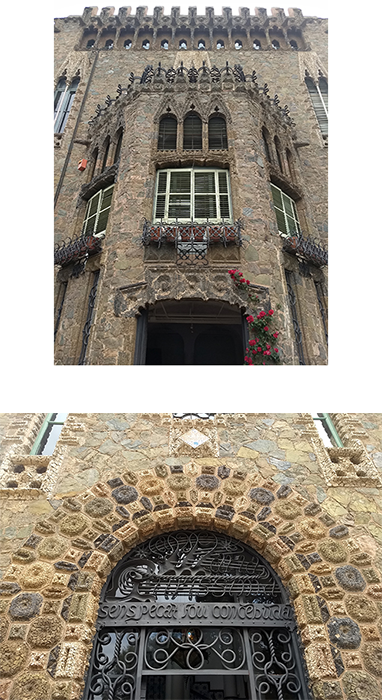 Images of Bellesguard shortly after the completion of the works. Photos: Josep Salvany i Blanch, Public domain

At that time the land measured 118,741 m² (3), while the area mentioned in the sales announcement is 5 ‘mojadas’ (1 mojada, old Catalan measure, is equal to 4,896.50 m², that is, it had 24,482.50 m²) , product of the subdivision of the original property. It was highlighted its condition as “speculative to divide and build chalets” and it was described as “earthly paradise” for which “only 35,000 duros are enough”, an amount that meant “almost the price of bare land”.

As a noteworthy fact, Gaudí’s authorship was emphasized by highlighting his name with capital letters, which speaks of the prestige achieved by the architect, whose signature provided special value.

In mid-1927, new ads in the same newspaper offered what was surely the same property, with a building now defined as “Gaudí type”, and its price reduced to 26,500 duros “due to urgent need”.

Providing more details, it is explained that the garden is made up with: “more than 5,000 varied vines, muscatel, etc., various chosen fruit trees, pears, apples, palo santo (Lignum vitae), assorted medlars; cherries, oranges, plums, etc.” It is also reported that it had two electric mills and a hen house, and it is stated that it is a property “For aristocrats and production, to rent at a good price and revalue”.

These ads were posted by “Sr. Salvá” (it also appears as “Sr. Salza”), with address at Carrer Entenza, 58, Principal, while in 1925 the property was offered by “Barbicane Co.”, located at Carrer Tamarit, 103, dedicated mainly to the sale of cars, motorcycles, trucks and vehicles in general, as can be verified by reviewing the advertisements of the time.

Finally, after all this process, the Torre Belleguard was sold in 1931.