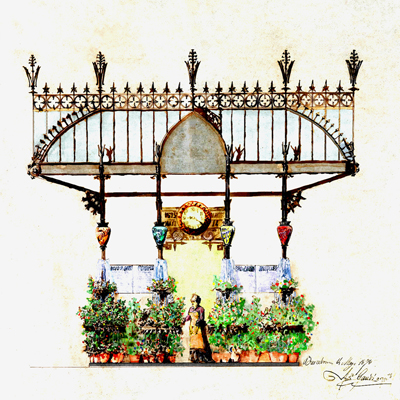 In 1878 Gaudí designed a kiosk for the public spaces of Barcelona. Signed on May 14th, the drawing shows an iron and glass construction in plan and elevation. The applicant, Enrique Girossi, presented the plan on the 20th of the same month with a report and the application to the City Council, initiating File number 853 from 1877 to 78. He affirmed that his proposal for public toilets and urinals with sale of flowers, panels of Announcements and public information was aimed at “satisfying a pressing need for the population.” He promised to cover all the costs of construction and installation of the kiosks, to conserve and sanitize them in exchange for a 50-year concession after which they would become property of the City Council. He also requested the prohibition of other similar licenses from being granted and the free provision of 5 cubic meters of water per day for each kiosk.

The report explains more details: “a small but elegant marble, iron and glass kiosk 4 meters long, 2.40 meters deep and 4 meters high” with a “roof that, advancing on the public road, protects from the sun and the rain on all four sides to passers-by who stop to read the advertisements placed on its smooth opaque glass walls internally lit by gas at night ”. They would have in the back a urinal for public and free use and inside two paid toilets for men and another one for women and a  washbasin. The space for flower delivery would be open 24 hours a day.

The iron column structure sat on a marble base. At a height of one meter, some supports were placed to hold flower pots that “at the same time collect the water that falls on them in small and constant rain from the top of the columns.” Attached to these, above the irrigation pipes, can be seen the external gas lamps in the shape of vases, which would also have advertising. The enclosures would be up to 1.70 meter high marble slabs of 5 cm. thick, and above these would be placed translucent windows intended to contain the advertisements. The roof was made of iron and glass, resolved in a cantilever and forming pointed arches over the doors. The kiosks were crowned by metallic  ornamental motifs.

On the main façade there was a large panel with a “clock dial for the public and illuminated at night can be seen from the distance, a barometer and a thermometer in the open air, and the calendar data corresponding to the year, month, week and day”. Spaces were reserved for official announcements, mail, railways and ships. The lighting would be by means of gas lamps and for the night closing, some iron plates were designed “that coming out of the lower part would rise to the top of the device”.

The elevation is a beautiful ink drawing according to Gaudí’s usual way of drawing in his first professional stage, detailed and meticulous. The façade is abundantly adorned with bouquets of flowers for sale, among which he also drew the florist.

The file followed a hazardous process due to the conditions demanded by Girossi. Finally, it was agreed to reduce the term of the concession to 30 years, to limit the free provision of water to 4 cubic meters per day per kiosk and to require a minimum of 12 kiosks in places in the city to be determined.

Although the license was granted on June 14th, the kiosks were never built, possibly due to Girossi’s failure to obtain financing, which in 1887 led to the withdrawal of the concession for breach of contract after various warnings.

Gaudí made other urban equipment projects for Barcelona that same year 1878: the illuminated billboards for the streets of the city commissioned by the businessman Julio Manuel Carré, not built either, and the streetlights for promenades and squares that the City Council entrusted to him, 6 of these fortunately completed, of which 4 reached our days.