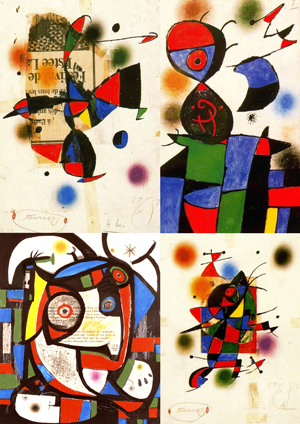 On April 20th, the birth of Joan Miró is remembered. The great painter and Gaudí have much more in common than their works seem to show at first glance. Both were Catalans, world-renowned artists, innovators, experimenters, and tireless workers. But beyond these coincidences there are a series of ties that communicate their biographies and their production.

Both attended in the 1910s natural modeling classes at the Cercle Artístic de Sant Lluc in Barcelona. There, together with young art students, the already famous architect practiced to improve the design of the Sagrada Familia sculptures. Miró recalled in a report the experience of sharing a classroom with someone like Gaudí: “We were young boys and he was an older man, but he came to draw like one of us. He was a modest man, like an apprentice and that says a lot about his morale. He was a great character and we knew it. ”

Another great coincidence is that inspiration in nature was a constant in both artists. It is remarkable that Miró and Gaudí discovered this fascination in the same place: the Camp de Tarragona. Gaudí in his childhood in the landscape of his native land, and Miró already in his youth in the farmhouse of Mont-Roig del Camp that his family acquired in 1911, where he would spend seasons for much of his life.

Remarkably, a long stay that marked his vocation for painting was due to illness, something similar to what forced the future architect to stay long periods at the Mas de la Calderera in Riudoms. The paintings of the years prior to Miró’s departure to Paris in 1920 recreate rural images and landscapes that recall Gaudí’s saying: “With flower pots, surrounded by vineyards and olive groves, animated by the clucking of chickens, the singing of the birds and the insects, and with the Prades mountains in the background, I captured the purest and most pleasant images of Nature, which is always my teacher. ”

Miró was always attracted to one of Gaudí’s favorite techniques, the “Trencadís” (compositions of broken tiles), which he applied while consciously imitating the architect: In a letter to Josep Lluís Sert in 1960 he writes: “It would be exciting to experiment with new local materials and inlaid materials, the same as Gaudí did.”

Trencadís covers Miró’s great urban work in Barcelona, “Dona i ocell” (1983), in the park that bears his name. The mosaic in Pla de l’Ós in La Rambla is also inspired by this technique. Gaudinian echoes can be found in the sculpture “Moon, Sun and a Star” in Chicago, and in several murals. When he was studying the making of the Unesco mural in Paris, he said to his collaborator, the ceramist Josep Llorens Artigas, that among other things, they would seek inspiration “in the great circle that Gaudí set in Park Güell.” Identical inspiration can be found in the murals and sculptures of the Maeght Foundation in Saint-Paul-de-Vence (France).

Direct object modeling was another technique shared by both artists. Miró molded elements of nature, such as branches and stones. Gaudí also practiced it on people and animals, as Rodin did, for example.

It is said that Miró said: “I think of Gaudí, to whom a field of stars is born from a stone, with a chrysanthemum in the middle.” In 1979 he paid a direct tribute to the architect in the set of engravings that he called “Gaudí Series”, with composition and color that evoke Gaudí’s creations in trencadís and seem to give materiality to those words.

Finally, there was another binding thread between the two geniuses: Miró was a friend of Joaquim Gomis, photographer and art lover who in the 1940s published the Fotoscops, a series of picture books that among other topics portrayed the Sagrada Familia and the work of Joan Miró . Gomis also produced a collection of carefully executed photographs of Gaudí’s works. He was the first president of the Amigos de Gaudí association in 1952 and between 1972 and 1975 he chaired the Fundación Joan Miró. He was a great admirer and disseminator of the architect’s work when it was largely underestimated by critics, and one of the promoters of its appreciation since the 1950s.