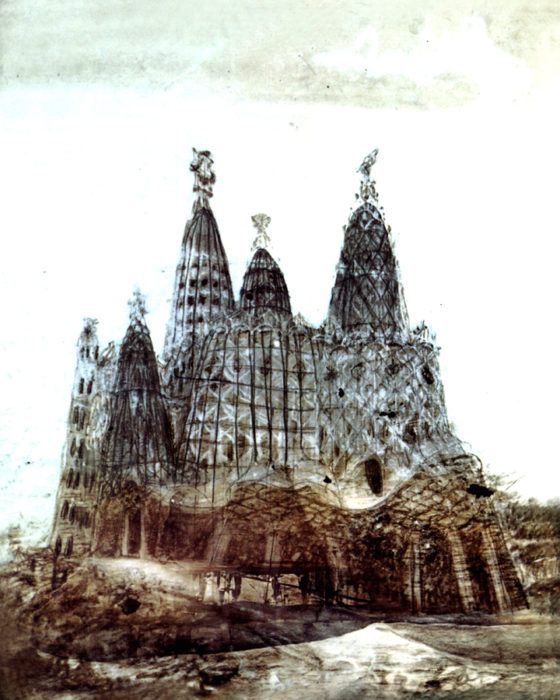 Two of Gaudí’s famous study drawings for the Colonia Güell church were acquired by the MNAC ( Museu Nacional d’Art de Catalunya).
They are an exterior and an interior view of the temple painted in watercolor on photographic prints of the famous three-dimensional hanging model.
This technique developed by Gaudí himself allowed to study with great precision the forms that the building adopted since its modeling by the use of sacks filled with pellets suspended from strings that represented the loads acting on it. 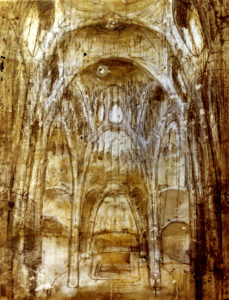 Found in 1967 hidden in a coal storage room 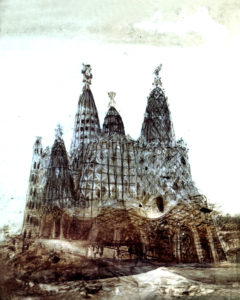 of a Colonia Güell masía (farmhouse) to save them from the Civil War fires, they were certified by Joan Bassegoda Nonell. They remained in private hands and were in the middle of a litigation for their ownership. In 2012 they were declared a Bé Cultural d’Interés Nacional (Cultural Asset of National Interest) to prevent their departure from the country. The acquisition for a value of 320,000 euros was made possible by the contribution of 75% by Caixa Banc.

These are two documents of incalculable historical value considering the scarce existing drawings of Gaudí’s hand as a sad balance of the fire of the Sagrada Familia workshop in 1936. They also show clearly the creativity of the architect who was able to develop innovative project techniques incorporating the latest advances, as in the case of colored photography.

According to the purchasers, the drawings are in a delicate state, so they will not be exposed to the public at this time. It is an invaluable contribution to the knowledge of Gaudí’s work that these magnificent pieces have passed into public heritage and their exhibition is planned next year.